There’s a genuine personality that translates into authentic experiences for those visiting Indiana. Here, you can spend your days paddling a winding river, fishing an inland lake or browsing the shops on Main Street. You can enjoy homegrown produce – and get to know the growers – at the farmer's markets, eateries and vineyards. World-class cities offer internationally renowned museums, performing arts venues and high-energy sporting events – all paired with friendliness as an added bonus. You can visit a bustling capital city, sunbathe beneath the soaring sand dunes, climb the highest hilltops or explore the deepest depths beneath the surface of the earth. Anywhere you go in Indiana, you’ll encounter genuine people and experiences. Even the busiest attractions aim to satisfy and delight because in Indiana, more than anywhere else, hospitality matters. That’s real. That’s Honest-to-Goodness Indiana.

Indiana sits, as its motto claims, at “the crossroads of America.” It borders Lake Michigan and the state of Michigan to the north, Ohio to the east, Kentucky to the south, and Illinois to the west, making it an integral part of the American Midwest. Except for Hawaii, Indiana is the smallest state west of the Appalachian Mountains. After the American Revolution the lands of Indiana were open to U.S. settlers. The influx of white immigrants brought increased war with the Native American tribes. The conflicts continued until the 1811 Battle of Tippecanoe, which was won by General, and future president, William Henry Harrison. With a name that is generally thought to mean “land of the Indians,” Indiana was admitted on Dec. 11, 1816, as the 19th state of the union. Its capital has been at Indianapolis since 1825.

Some interesting facts about Indiana:

The first train robbery in the United States occurred in Indiana on October 6, 1866. A gang known as the Reno Brothers stopped an Ohio and Mississippi train in Jackson County and made off with $13,000.

The Indianapolis Motor Speedway hosted the first Indianapolis 500 mile race on its 2.5-mile track on May 30, 1911, two years after it opened. Equipped to seat an audience of more than 250,000, the Speedway is the world’s largest spectator sporting arena.

Although authorities claimed the county jail in Crown Point was “escape proof,” notorious bank robber John Dillinger successfully broke free from his cell on March 3, 1934, by threatening guards with a fake pistol carved from wood. Using the sheriff’s car to make his getaway, Dillinger crossed the Indiana-Illinois border, setting off a federal manhunt that led to his death by FBI agents on July 22nd.

Below is a small selection of our USA holidays including Indiana. We can tailor make a trip to Indiana around your ideas. Just give us a call. 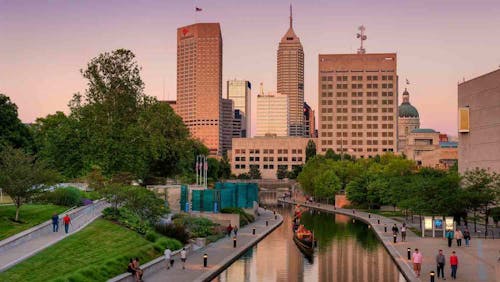